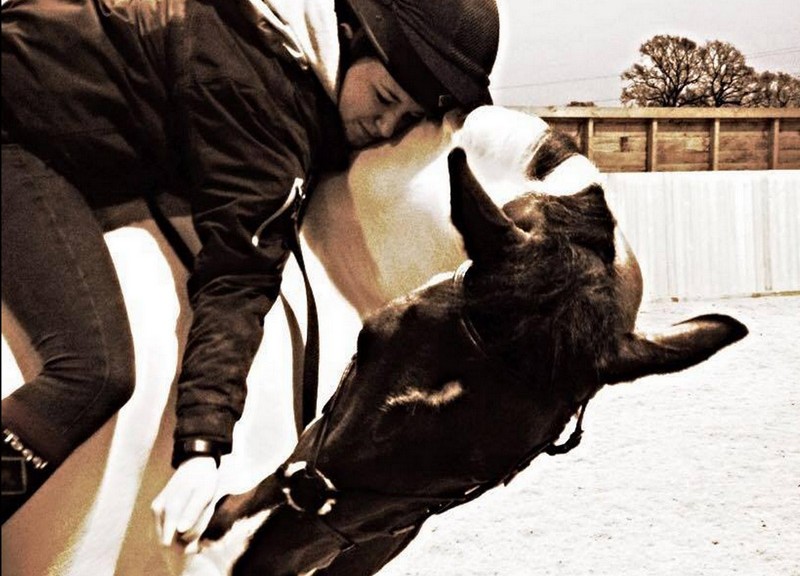 I am Abby Jones and I have been a member in Area 5 of the Pony Club for several years.

I started with my lead rein pony Magic who became a whizz at Mounted Games and have carried on through the years with many well-loved and known Pony Club Ponies representing branch and area in all disciplines.

I have really enjoyed my time with Pony Club and owe a lot of where I am today, Eventing, to their support, guidance and training over the years.

I was approached by “2Gallop” as a “Rising Star” and asked to write a small piece for them.

I hope you enjoy it!

Please feel free to ask me any questions either by email or contact and follow me and my team through Social Media.

Thank you and Good Luck …Abby

Hi, my name is Abby Jones and I am an 18-year-old event rider based in Cheshire. Horses are my passion and I’ve been riding for as long as I can remember, my first pony Magic being a little riding school pony, did everything from pony club gymkhana to county lead rein showing, she helped me find my feet with horses and taught me how to care for a horse and the basics of riding.

My life bringing on young horses came as a bit of a shock, when we set out to find a companion for my first pony, Magic. We ended up with a 6 months old colt, J20, who we then spent a long period of time backing and bringing him on, teaching him to jump and taking him out to local shows. After 4 years we sold him to a family of young children who wanted a safe pony, to do a bit of everything. My next young pony was a gorgeous Connemara called Robbie who was also brought straight over from Ireland as a 4-year-old. Like all my horses I spent a lot of time with him gaining a bond and working on him to become the perfect little working hunter pony, together we went all the way to being the Trailblazers Combined Training Reserve National Champions. I realised by doing all this, where my heart lies and that I loved the feeling of self-accomplishment and the partnership that can be built between a horse and rider.

My current horse is King Champ who I have brought on from a green 4-year-old from Ireland to compete at BE100, with the hope of doing Novice by the end of this season. However, it hasn’t been without its ups and downs bringing on a young horse on a tight budget whilst taking on GCSE’s, A-levels, currently a full time job and University in the future, alongside injuries. But where there is a will there is always a way. Together we have accomplished a lot over the last three years including, coming 5th at the Novice Pony Club Championships, 2nd at the Combined Training and in the team show jumping at the Riding Club Finals, 4 top 5 placing in BE, followed by competing at Blenheim in 2015.

I highly value British Riding Clubs and The Pony Club for all the help and support they have given me over the years, with all my horses from subsidised training to representing them at a National level on many occasions, from dressage through to eventing. I would also like to take this opportunity to thank my parents for all their support so far in helping me accomplish my dreams, they’ve taught me to never give up and give it your all and keep pushing for what I want, if you want something and you are committed enough you will achieve, but don’t expect things to happen just by sitting back and watching. I very much feel with this sport like any sport, you get out what you put in.

This year I hope to improve on me Personal Bests in B100 and move up to Novice. I also have my heart set to competing at Chatsworth in the BE100 Arena Eventing Challenge.

Finally, I would like to highlight to you a few very important things to me, that have been key to so far:

Organisation is key, know what you want to achieve (don’t panic if it doesn’t go to plan as they are horses and we are human, neither are always perfect), especially when planning around school/work, don’t think it’s not possible because it is, I Have done it, it wasn’t easy but if you are motivated and you know that’s what you want then you can do it and I know I’m not the only one out there that has managed it.

The bond between horse and owner is irreplaceable so don’t ever take it to granted, I have always felt it’s the most important part when owning a horse, because like humans they want love and care. A bond is a trust; this is crucial in any discipline as the horse needs to trust you to do as you ask. Would you trust a stranger or would you rather your best friend/family?

A huge WELL DONE to the team from CHESHIRE HUNT NORTH who won the Area Quiz and went to Moreton Morrel to compete in the QUIZ FINAL recently.  They came a fantastic FOURTH out of 19 teams.  Please look on main Website for Score sheets/Results et

The NFU Mutual Winter Triathlon Championships were held on Sunday 13th March at Stantonbury Leisure Centre, Milton Keynes. 260 competitors from around the UK took part in the Minimus, Junior and Open competition. Area 5 had 17 competitors that had successfully achieved a place to compete at this event, all of whom performed extremely well on the day!

We had a number of highly placed competitors that deserve a special mention.

Harrison had a fantastic day achieving 1st place in a class of 49 boys. He received a medal for the best swim in his class.

Freddie achieved 3rd place in a large class of 42 boys. He received a medal for the best run, running 1500m in 4 minutes and 55 seconds!!

All of our Senior Boys came in the top 20 places with Russell Wingfield (Aberconwy) achieving 7th place and Toby Johnson (East Cheshire) coming a very close 8th by only 6 points.

We also had great success within the team competition with our team of Freddie Ashworth, Harrison Aspinall, Beatrice Taylor (Cheshire Hunt South) and Neisha Roberts (Flint and Denbigh) coming 4th out of the 54 teams that were entered.

A really big congratulations to all of our Area 5 competitors who qualified to achieve a place to compete in the competition and were great ambassadors for the Area.

Quiz sponsored by The NFU Thanks from a very grateful Area 5 Member …

Just like to say thank you to Meg for organizing the William Blane Training at Kelsall last week. I enjoyed it very much, I have never had a lesson with William before and I found he was very informative and he had a great sense of humour !! Look forward to when he visits Area 5 again!
Brier Leahy