A series of monthly polocrosse training rallies have been organised and is suitable for all standards from beginners to advanced.  If you haven’t already given polocrosse a go why not come along to these sessions to give it a try.

Full details available on unity, all sessions are at Moreton Morrell.
Dates:
November 28th
December 19th
January 16th
February 13th
North Warwickshire polocrosse players did us proud at the 2021 Pony Club Championships.
Isla Oliver-Byrne was playing in a Novice Minis team which came 2nd.
Isaac Flint was playing in a mixed team of Open Minis and they also came 2nd.
Harry Horton-barr , Keeley Rock and Jayda Williams won the Open Juniors after a very exciting game against Area 11.
Our Open Seniors of Katie Loutsiou, Danny Woodward and Tegan Bristow took the winning Open Senior title and our combined Junior and Senior teams bagged the Malden Trophie.
What amazing results !
Congratulations to you all.

Polocrosse is now being played by 55 Pony Club branches in the U.K.  and the game is growing and becoming more popular. I’m sure North Warwickshire has helped promote the game with our ongoing success at the Pony Club Championships.

If you just want to have a go and see if you like it or you want to see if your own pony will play why don’t you give me a ring. You don’t have to have the pressure of being at a rally or even at a general training session. We can just give you a go on a one to  basis or  if you prefer a very small group.

Hoping to see more new faces on the polocrosse pitch this year ! Polocrosse is one of the fastest growing equestrian sports it’s cheaper than  almost all the other disciplines and addictive for every member of the family. NWPC is an incredibly successful branch.

We are always looking for new players. If you want to have a go come to one of our rallies or call me on 07944394144 and we will organise a go on your pony or you can have a try on one of my ponies.
Polocrosse is great fun and very addictive so come and try it out or at least come and support us. It is a great spectator sport!

All age and abilities can play and mounted games ponies adapt      extremely well.

Polocrosse is a cross between polo and lacrosse. Once you have learnt the basics it is great fun for all ages over about 7 years old. We play in teams of three or four and you do not need a special horse or pony to take part. Ex-race horses, games ponies, show jumpers and hunters are all on our teams at present. The season runs from May to September and we try to compete about 2 weekends a month. Polocrosse can be done on any pony (so long as it doesn’t kick) and even the nervous ones will usually be persuaded. It’s one of the cheaper disciplines to take part in and can be most closely associated to ‘Quidditch’ on horse-back. I can often lend people ponies to try it on (although you may have to come and fetch it) and can often hire a pony for competitions. If anyone would like to come to some on foot training sessions give me a ring so I can see how much interest we have.

Any questions please call me on 07944394144 or email farriertim@googlemail.com

A Branch of The Pony Club 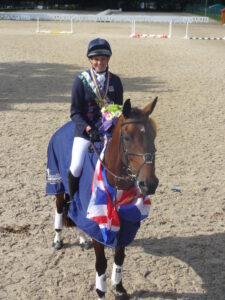