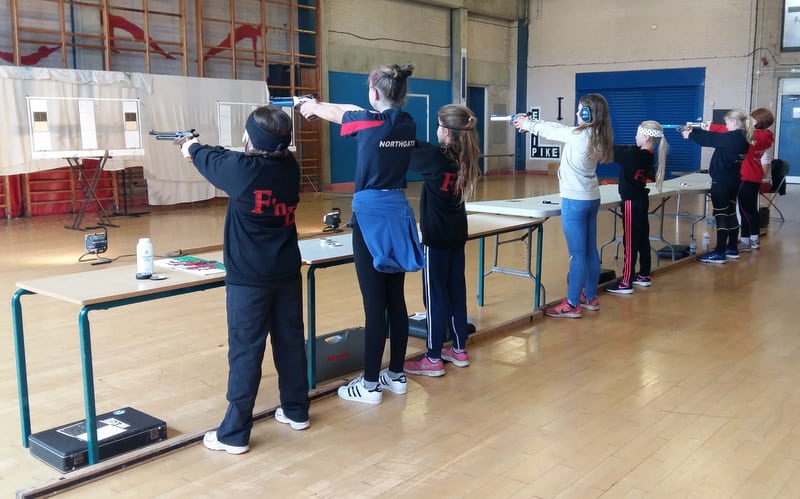 The Area 5 triathlon took place on Sunday 29th October at Mold Leisure Centre. It was a fantastic day with over 100 competitors of all ages taking part. This event was particularly exciting as not only was it our first event in our “Trio of Tris” series but it was the first time our younger Pony Club members “Beanies” (under 8s) had used our brand new targets made especially for bean bag throwing. They did really very well bearing in mind the targets were larger than the majority of the Beanie competitors.

Alongside our great turnout from those in Area 5, we were really pleased to see so many faces from Pony Clubs out of the area including those from North Shropshire, Albrighton, Ludlow, Lancaster and District, Wheatland and Pendle! We are looking forward to seeing you all again at our next triathlon.

There were some brilliant results on the day – everyone performed extremely well!

Toby Johnson (East Cheshire) had a great day winning a very strong Intermediate Boys class by over 100 points with Best Shoot and Best Swim. Best Run was achieved by Russel Wingfield from the Aberconwy Pony Club.

Lily Johnson (East Cheshire) matched her brothers first place coming away with Best Shoot, Swim and Run in the process! Not only was Lily taking part on the day but Lily had been very busy beforehand baking some lovely cakes that she sold on the day! They really were yummy! There was also tea, coffee and hot chocolate on sale to warm everyone up provided by Lily’s mum, Judith Johnson.

The Junior Girl class was won by one of our out of area competitors, Sasha Oldham from Lancaster and District. She also took home Best Run. Best Swim was achieved by Cheshire Hunt South’s Beatrice Taylor and Best Shoot was jointly achieved by Kaitlyn Wyn (North Shropshire) and Ella Booth (Cheshire Hunt North). Both girls shot a very impressive 940.

Thomas Brown from the Ludlow Pony Club had a great day – not only did he win the class but also took home Best Shoot and Best Run. Archie Lynch (Flint and Denbigh) achieved Best Swim.

Holly Morris was one of the many members of the Ludlow Pony Club who performed very well  – not only did she win Best Swim but she also won the class! Best Shoot – Ellen Butler (CHS). Best Run – Zara Smith (EC).

Well done to everyone who took part from the Area 5 Tetrathlon Committee. We shall look forward to seeing you all back at Mold Leisure Centre on Sunday 28th January 2018.