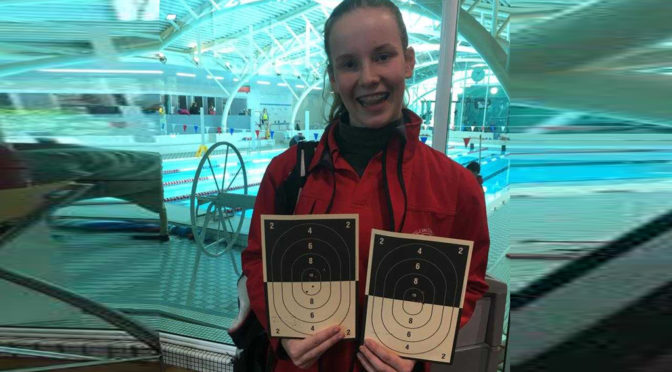 The following write up is from Beatrice Taylor, our Area 5 representative for the Wales and Borders tetrathlon team at the Windsor Horse Show!

After receiving the exciting news that I had been selected to represent Area 5 at the Royal Windsor Horse Show, we were finally heading down to London. My brother, Rufus, was also competing at Windsor, in the NSEA Show Jumping with Lola, so it was going to be a busy weekend.  It took 6 ½ hrs to get there and we’d been told all the lorries were being towed on and off Windsor Park due to torrential rain. We stabled overnight offsite at Cowarth Park, with lots of grumpy polo ponies. My great friend, Kiera Booth, came with us and helped with the ponies, she helped calmed me down too and was a good friend to share the experience with. Dad finally groaned at me to go for a run around the polo pitches; I had too much energy!

I woke up the next morning refreshed for the exciting day ahead. We rode our horses before being dropped off at Windsor leisure centre for the first phase, the shoot.  On arrival,  I met up with Taran and Lily who were both brilliant competitors and teammates. After a briefing, the shoot phase began. My mum told me to get into my zone, practice my process and breathe.  The words “Are you ready, watch and shoot, Fire” were going round and round in my mind! I needed a good first target however, I was slow on my second shot and pulled an 8. The rest of my target looked good. We waited for the results and I started thinking about the swim. We received my targets back and I had shot a 980, a personal best in Juniors and best shoot overall! I was so pleased, I was then asked to do an interview explaining the shoot process and why it was important to me, big gulp!

Second phase, the swim! As I put on my race costume, I noticed a small rip in the seamed on the leg which was getting bigger with every step.  Mum told me to focus on the race! I was swimming next to Tom Brown from Ludlow, representing Central England.  We were both chasing 10 lengths.  We hit the water and battled it out right until the last second where Tom pulled away from me on the last couple of metres, he PB’d with a 9.24 and I managed a PB of 9.22, which was awesome.

After the swim we walked to the show ground for the run which takes place along the River Thames.  1500m with an optimum time of 5 minutes and 40secs achieving 1000 points.  I really struggled to get into the right race mood and felt a bit flat after the warmup.  The girl in 2nd place to me, was an exceptional runner and was  chasing me down, I just couldn’t do more as she pulled alongside, despite setting off 1 min after me!  She deservedly took the lead with a brilliant performance. Maybe it was the double scoop ice-cream I treated myself to earlier!  Taran and Lily both ran well which helped pull us forwards.

We were at Windsor with everything to see, the amazing castle, the huge arenas and the noise and excitement.  It was time to explore.  Later in the afternoon we had to tack the horses up so the Irish riders could pick which ones they wanted to use for the Sunday event, Geeves wasn’t picked which I was both glad and sad about because I think he’s fabulous!

On Sunday morning my bff Kiera and I washed off Geeves and plaited him ready for the ride.

The riding phase was a show jumping course with a slip rail (as a show jump) with an optimum time.  The course walk was just starting so we went to walk it with the rest of my team, jump number 3 was a big oxer and 5 strides after it was the slip rail, you either did a circle or went straight to it.  Taran was riding his new horse, a young and very tall 17 hands, quite a challenge to stop and remount after the slip rail. The course was very exciting with a crowd sitting on 3 sides and all the noises of Windsor in the air.  We continued our warm up, Geeves was getting really poppy, must have been the oats! Then we were asked to walk up to the waiting area on horse back as a team, we were all very keen to go. Taran was first to go, then Lily, then me. Taran went clear with a few time faults but that didn’t matter, he’d managed to get back on, then Lily, she also went clear.  Then it was me, I was so excited I couldn’t wait to go.  The buzzer sounded and I was off flying through the course, Geeves wasn’t touching anything.  I went straight to the slip rail and trusted Geeves to pull up quickly, the circle would just cost too much time or make you rush other fences.  He was steady as a rock.  Back on, he flew through the rest of the course, I was at the last jump, a big oxer, he was pulling a little so I had to tell him to bounce up.  He shortened and then powered over it.  I was so pleased with him.  I think he knew we had just gone clear because he tore around the arena with his tail up, I was so proud of him. We made my mum cry which is always a good sign. We waited for the results and had to parade in the Frogmore Arena, it was very exciting.  Teams first with Wales and Borders scooping a 3rd, Central in 2nd and Scotland came 1st. Then the individual, my heart was pounding as I was lying in second overnight and I knew that my closest competition had not gone clear, so maybe there was a chance!  Then they asked would the winner take their place between the trees, followed by my name.  We had done it! Individual 1st for Wales and Borders.  It was a thrilling moment and we had a very exciting canter lap with all the Tet competitors, I think Geeves was very pleased with himself too!

I can’t thank everyone enough, the Area 5 committee for selecting me to represent Area 5 in the Wales and Borders team, my parents for putting in all the effort to getting me there and supporting my training. Karen Barrow for helping me along the way and everyone else for supporting me throughout the experience.  To my best friend Keira, for helping me and encouraging me to do better and always reminding me of what a privilege it is to be a part of this, even when it’s not going to plan.

It was a fantastic weekend.