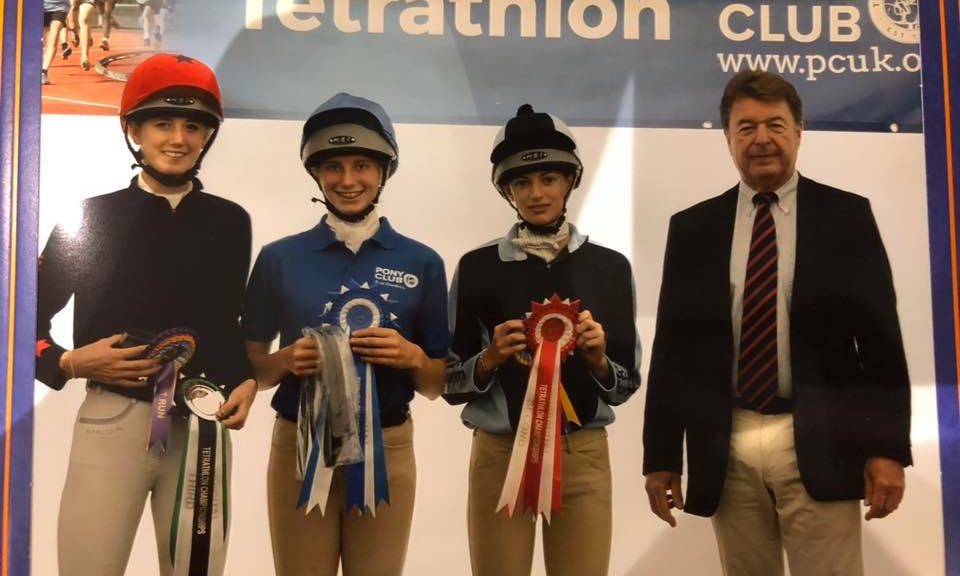 On Thursday night we left for the Pony Club Tetrathlon Championships. Once we had got the horses settled in, we made plans for the busy day of shooting and swimming, everyone was very excited. I wasn’t shooting until 2pm on Friday afternoon, leaving what seemed like a very long morning as I was quite nervous, but it also meant I had time to ride Cloudy and get organised in plenty of time. It felt rather strange starting the competition so late, as usually the older competitors are on first.

My shoot went well for me and I ended on a score of 940, which was good enough for joint 4th best shoot. My swim was a couple of hours later, at an amazing pool in Warwick University. I swam 8 lengths and 21 metres, my joint PB! I was a little frustrated however, as it was so close to the 9 lengths I have been aiming for all season! With my fellow area 5 teammates we then went to the cross-country course for an Area 5 Intermediate course walk at Offchurch Bury.  This is always great fun and exciting sorting out what lines to ride and whether to take specific learners or not, as my best friend and I were both on relatively young horses and it was a suitably testing course for a championship.

As I wasn’t riding until the afternoon, Mum and I walked the course again and watched how the open girls and intermediate boys were riding it, especially a rather tricky jump at 9. The course on the whole looked like it was riding well if it was well ridden so we decided to go for all the direct routes.  I was over the moon when Cloudy flew round, with an annoying 7 seconds over the time preventing a 1400 ride but, being one of only 5 clears, bumped me up into first place going into the final day.

I had a rather tense evening with the pressure of the run on Sunday looming, however the party was fantastic, especially the games at the Wales and Borders camp beforehand! I had lots of fun with lovely, supportive friends and dressing up in the twenties costumes was fun!

The run course was hard because there was a long, relatively steep hill at the start, however it was a quick course and many people were very close to their personal best times. The whole large field was filled of so many people shouting and cheering their friends and team mates on, which was lovely.  This is what makes tetrathlon so special. Before long it was time for my run, and I was very nervous, as the run was very tough, however was made easier with all my wales and borders team cheering me on.

When the scores were up and it was calculated that I had held onto my lead, I was amazed, as it was my first year in Intermediates, and the icing of the cake was the fact the East Cheshire team came third! After the presentation, choosing photos and saying goodbyes, we picked up the horses and went home, with a McDonalds on the way!

I owe a huge thank you to Area 5 and Wales and Borders for such a fun weekend, and of course for allowing me to qualify. The rest of the Area performed fantastically, with the highlights being Beatrice Taylors brilliant 3rd individual place in a very hotly contested Junior Girls, with Lana Booth coming in at a fantastic 6th place in her first year in the class. Toby Johnson was 6th and Freddie James, Rufus Taylor and Ella and Kiera Booth were just out of the placings. It was an amazing weekend filled with incredible people and true sportsmanship from all involved.