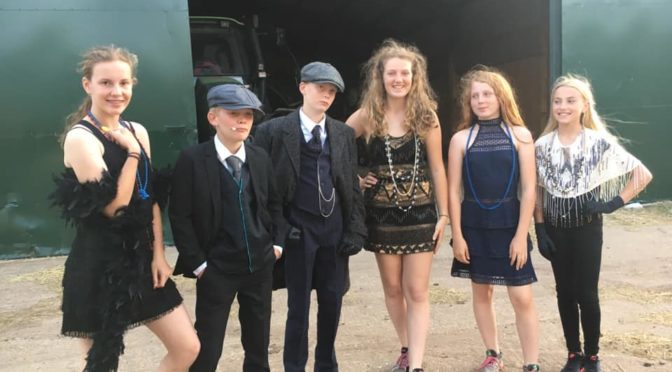 Well done to all our Area 5 competitors who successfully qualified to the National Tetrathlon Championships.

For the second year in succession, the Championships took place at Offchurch Bury, Warwickshire (with kind permission of Mr Harry Johnson). Lloyd Hunt once again designed a challenging cross-country course which proved extremely influential to the final results. There were only 6 clear rounds within the time at open level and three at intermediate. 322 competitors from around the UK took part in the Championships.

Annabel James had a brilliant weekend! Her shoot score of 940, swim of 8 lengths 21 metres, ran 1500m in 6 minutes 29 seconds and a cross country ride score of 1386 gave her a total of 4107 points and put her in 1st place in the Intermediate Girls competition.

We had 8 competitors taking part in the Grassroot Championships, 2019.

This year the Grassroots competition (open to branch and centre members who have not competed at Junior level tetrathlon or above at Regional or Area competitions) attracted far more entries than in the previous 5 years. 55 competitors making up 15 teams throughout the UK took part. Area 5 had two teams competing. Team one consisting of Leah Lamb, Constance Wight, Harry Taylor and Sophie Mulcaster did exceptionally well winning the competition. Team two was Abigail Mulcaster, Polly Johnson, Thomas Johnson and Ellen Butler. Harry Taylor achieved second place with a score of 4431, just missing out on first place of 4453 – well done Harry! Sophie Mulcaster achieved 9th place with a score of 4227.

Area 5 were out in force at the Championships this year with 12 competitors, plus another 8 in the Grassroots competition which shared the venue. Members of the Area 5 Tetrathlon Committee were also on hand to help with the event and support our competitors. We were so lucky with the weather, even though it was wet at times and one jump was removed from the Junior cross country after the approach had been cut up by the Open and Intermediate competitors. Full credit must go to the organisers for putting on such a great track as well as all the other elements of the Championships.

Grassroots competitors were not divided by age or gender and everyone ran 1000m, swam for 3 minutes, shot from 7m and rode over showjumps.  Cheshire Hunt South did spectacularly well in the individual competition: 2nd for Harry Taylor, 9th for Sophie Mulcaster and 10th for Thomas Johnson. This helped the Cheshire Hunt South/Flint and Denbigh team of Harry, Sophie, Constance Wight and Leah Lamb to win the team competition, while the CHS team of Thomas and Polly Johnson, Abigail Mulcaster and Ellen Butler were 10th.

It was good to see so many Area 5 junior competitors who all tackled the challenging course magnificently. Beatrice Taylor (CHS) was the only one of them to maintain a 1400 ride score which added  to a shoot of 940 and excellent run and swim results meant she finished 3rd overall. Lana Booth (CHN) was not far behind in 6th overall, after jumping clear with just a few time faults. CHS had a full team of Junior Girls (Beatrice Taylor, Florence Butler, Aisling Stott and Madlen Carlick) which finished 8th, helped by Aisling and Florence also jumping clear with only time penalties. All three of our Junior Boys (Rufus Taylor, Archie Peffers and Freddie James) jumped clear but incurred time faults. Across both junior classes less than half of the competitors jumped clear as there were some tricky combinations and the designers had made full use of the slopes and turns to challenge the riders.

The 100cm course for the Intermediates was even more of a challenge so that only 9 of the 71 competitors jumped clear and 6 of these had time faults. Fortunately Annabel James (East Cheshire) was on fine form and finished the ride with just 14 time faults which combined with excellent results in the other disciplines allowed her to beat the other 45 girls and finish first overall.

Open competitors also jumped a 100cm course but it was slightly different to the Intermediate one and asked even more questions of the riders and their horses.  Toby Johnson (EC) was one of only 14 (out of 68) riders to go clear; he was just 1 second over the time and finished 6th overall.

CHN were one short for a junior girls team but Keira and Lana Booth were joined by Rufus Taylor from the boys and Ella Booth from the Intermediates to form a mixed branch team which came 3rd out of 29 teams. Annabel and Freddie James and Toby Johnson from East Cheshire combined with Archie Peffers from Waen y Llyn to form another mixed branch team which finished 9th.

After the relief of surviving the cross country course everyone dressed up for the 1920s themed party.

For the first time since the Grassroots Class was introduced.  Area5 had 2 strong Teams entered.

Both Teams produced amazing results over the two days with lots of personal bests achieved and 3 top 10 placings!

gaining 10th Individual and the mixed Team which consisted of Leah, Harry, Constance and Sophie took an amazing

Both Teams had a great time over the weekend and really embraced the atmosphere of Champs!

This year Area 5 was represented by Annabel James and Toby Johnson, both from East Cheshire. Toby was one of very few riders to achieve a 1400 ride score and was joint winner of the shoot with a score of 980. These scores put him 9th overall and helped the Wales and Borders boys team to a magnificent double of winning the Team competition against all the other regions, and the International competition against England, Scotland and Ireland. Annabel put in a very creditable performance for her first time at this level and helped the Wales and Borders girls team come 6th out of 16 teams and 3rd in the International; behind Ireland and Scotland but ahead of England and Northern Ireland. The Kelso cross country course was a typically challenging Regionals course and it defeated many riders but not Toby or Annabel. I believe the Saturday night party (A touch of Tartan) was also a typically enjoyable Regionals party and full credit must go to the Scottish Tetrathlon people for putting on such an amazing event.