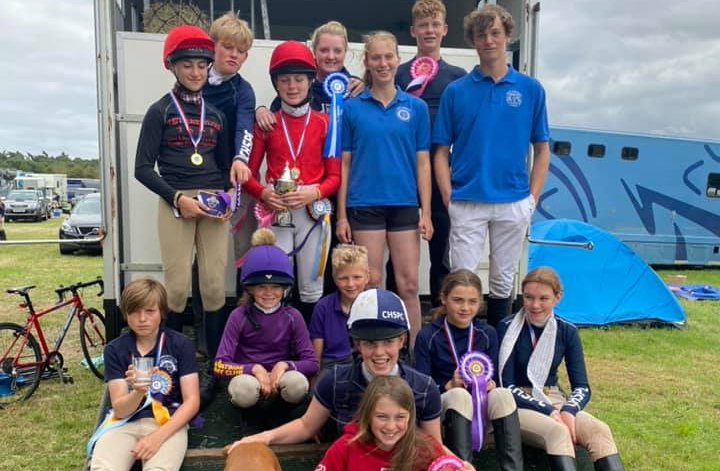 The first was the Senior Regional Championship which took place in Melton Mowbray.  For this competition, the best in the various regions are invited to be in Regional Teams and compete against one another.  So, although competitor numbers are relatively low, the quality is high as they are the cream of their particular region.  The XC was full of questions but the bogey fence was the skinny in the water and was very influential.

Wales and the Borders did particularly well as both the Girls and the Boys Welsh teams came 3rd out of 10 regional teams. Unfortunately, Ireland could not be with us this year because of Coronavirus.

The Boys team was –

Jack Stevens from Brecon was overall Senior Champion with an amazing and rare 1000 in the one-handed, 10m shoot.  A Welsh Champion.   MorganThompson was 5th.

The Wales and Borders Girls team was –

The second Competition was the National Championship which took place at Offchurch Bury.  This is the first year that Tetrathlon has been held at the same venue/time as the main Championship and the atmosphere was quite special.  This Tetrathlon Championship is when Branch teams compete against one another but the 19 Areas are invited to enter teams as well into a separate Area competition.

Area 5 were well represented at this competition for which they had to qualify from the Area competition in June.  Members were from ChHS, ChHN, E.Ch., FnD and Tanatside.

There were 29 Area teams in all – Area 5 had 3 forward. The “Oaks” team (Beatrice and Harry Taylor, Lana Booth and Freddie James) came 5th. It was extremely close – their final score was 12832 – only 81 points behind the winning team.  Every second on the run and every metre in the swim was fought for.  Individually, LANA BOOTH (CHN) won the Junior class with a 980 shoot and a clear XC –  so is the Junior Champion. This was by far the biggest Class of the day with 88 competitors.

The Area 5 “Beech” team (Annabel James (E.Ch), Rufus Taylor (CHS), Oliver Loud (WWW) and Leah Lamb (FnD) came a respectable 10th. Individually, Rufus came 5th in the Intermediate boys with an amazing 9.9 swim. Oliver Loud (WWW) came 7th in the Junior boys competing in his first big competition.  Leah Lamb (FnD) did well in the Junior Girls going clear on the biggest course she had ever done in her life !

The Grassroots is a mixed age/gender class for which you don’t need to qualify. It is there to encourage youngsters or beginners.  Archie Evans from Tanatside competed in the Grassroots as did Lochie and Finton White (E.Ch).  Well done to Sophie Mulcaster(CHS) who came 2nd.  This class did not go XC but did a small course of Sjumps instead.

The XC course at this venue caused huge problems for the Seniors – there were a number of falls,  stops and riders walking home in the first half hour but things improved as the day progressed.

Apologies for not mentioning everyone and for any factual mistakes!