Well well! Tet Champs has once again delivered on being both the extravaganza and centre piece of the Tet calendar. The competition, camaraderie, kinship, inter- branch relations and hot hot weather were all available in bucket loads and will go down as a champs to remember.

With the exception of a few, most Area 5 tetrathletes were on their second Tet Champs and to some extent everyone knew the game. OffChurch would be a full up and testing course and the standard of the shoot, swim and group run heats would be tough. Oh and the eagerly anticipated partying.

Tet is a team sport, and although we cherish the individual performances, the winning senior boy and girl in their speech echoed the sentiment that we should be encouraging as many as possible to come and try our sport. Cheshire Hunt South fielded a junior Girls team – the Divas – Abby, Sophie, Polly and Harriet. The WWW’s were hugely successful in fielding a boys team of Olly Loud, Henry Bates and Jake Stockton, well done to The Wynnstay, a team of boys is an achievement in itself.
Area 5 were then able to make 3 mixed area teams; The Scarlet’s- Leah Lamb, Bethy Stephens, Harry Taylor, and Thomas Johnson; The Green’s Bea Taylor, Orla Kissane & Scarlett Gilruth; and The White’s Annabel James, Carys Dillon, Freddie James.

In the Intermediate Girls, Bea Taylor from CHS got the ball rolling with a shoot to keep her in contention, but at 880 left some ground to make up, which she promptly did with a fantastic 9.19 swim, putting her in pole overnight and Freddie James put in a respectable 900 shoot, and Carys Dillion from Tanatside competing for the first time at Champs shot well with a 760.
In the Junior classes, top marks to Olly Loud from WWW’s with a perfect 1000, but scores that were more mortal and reflected the pressure of the occasion- Sophie and Thomas held on to a respectable 900, Bethy 860, Leah an 840, Abby 820. However, Polly returned an 840 which we think is a PB in competition for Polly and Harriet a 760, again an improvement on 2021 well done, Harry, leaving himself some work to do with a 780.

The Friday heat was building rapidly, and we suddenly found ourselves clamouring to get to the air conditioned Leisure centre for the swim, The viewing gallery in the pool was, for once a welcome cool break from outdoor heat. The Swim phase was every bit as exciting as it promised to be and gave the competitors a chance to put all their training to the test. Safe to say that everyone came back happy from the Swim, with PB’s a plenty- well done to Thomas, Harry, Polly, Harriet, Olly & Bethy, all swimming a PB, to Leah who PB’d making the touch on 9 and to Abby who broke the 9 length and pushed on a bit more.

The late Friday afternoon sun was then a fantastic chance to cool down in the river, so everyone trooped off down the hill and jumped in- it was great meeting and spending time with Scottish and Northern Irish tetrathletes on the river bank.

To the Riding then, and Saturday was another scorcher, so HQ planned ahead and tried to go an hour early at 8am, but suffered a pre start hiccup and eventually got going at 8.30. The Open and Intermediate classes rode first and avoided the worst of the heat- Bea Taylor putting to bed the water complex demons of last year, rode a text book clear round to maintain her lead.
The junior boys followed the Intermediates and max 1400 ride scores went to Olly, Thomas, Harry, & Jake, well done. It was well into the afternoon and the height of the sun when the Junior girls rode; Well done Scarlett Gilruth, Leah Lamb and Bethy Stephens all with a perfect 1400, sadly Orla accidentally missed a fence toward the end of the course, which can be hard to take, I know, I recall all too well with first hand experience from my days in tet (!😂) but hopefully she will come back stronger for it next time. Then it was the turn of the CHS Divas; someone had clearly prepped the course commentator who relished in their name as one followed another. Huge well done to Abby on her new ride and Sophie stepping up and both scored a full 1400 together with Harriet on the ever reliable Slaney. Polly was also on a new ride for 2022 and rode a challenging & brave round on a bold pony.

With the ride done and literally dusted, it was all eyes on the party; Cops, Tom-Cats, Construction workers, and Cheer leaders in true collective ‘Village People’ style partied their way through the evening, though some partied perhaps more than others!! There may have been a hint of a parent or two joining in but I couldn’t possibly comment any further on that.

Going in to the run phase it was all to run for: Olly was leading the Junior Boys, Thomas in joint second, Bea leading the Inter girls, and The CHS Divas lying second, chasing 26 seconds on class leaders the Wylie Valley, but also being hotly pursued by The Beaufort girls on their heels, only 10 seconds behind.
Tet Running at Champs is in seeded heats, and the event was fantastically exciting as the route permitted viewing throughout giving plenty of opportunity for ‘encouragement’ along the way! Again, there was some really strong runs, well done Olly with a stonking 5.08, to Orla with a 5.38, and Sophie with a heat-leading 5.46. The Inters and Open ran later and the heat dial was once again notching up by the minute. Friendly Tet Family waited for the runners to cross the finish and greeted them with buckets of cold water! Well done Fred- amongst a really strong heat, to Annabel, and to Bea- all battling the competition & conditions, and with Bea hanging on to her lead to take the win – huge well done Bea, we’re all mega proud of you! In the Juniors, Olly won the Boys class with a hugely impressive and unassailable 4475 points, and Thomas Johnson 5th on 4342 points.
In Junior girls, Sophie was individual 5th on 4396 points, but the CHS Divas cemented their 2nd place by extending their lead over The Beaufort, but couldn’t match the speed and power of the girls of the Wylie Valley (Their coach is an Olympian!) nevertheless, team 2nd is a huge achievement- one that was matched by the Wynnstay in the boys class- well done all round. The Mixed Area Team Scarlet of Leah, Bethy, Thomas and Harry came 4th. There were additional rosettes for 1400 scores and completion medals for everyone who finished- which given all the challenges was no mean feat.

There was also the reformatted Grassroots class to bring on our next generation of Tetrathletes; no one from CHS this time, but Archie Evans of the Tanatside, Lleucu and Macsen from the Fn’D and Imogen Gilruth from WWWynns were all competing for first time. Well done to Lleucu placed 9th and to Archie who finished an amazing 4th! Ones to watch for the future.

So, we finish the champs with a fantastic set of results for CHS and Area 5, both with individual and team performances, creating a really strong base to build from and hopefully bringing some of the Tet enthusiasm back to the pony clubs to inspire more members to join in and give it a go.

The Tet season isn’t quite over yet, though perhaps time for a short pause for an actual summer holiday(!)- before the Winter Tri’s commence there will still be time for Tetrathlons arranged by The Albrighton, the Flint n’Denbigh and Cheshire Hunt South in September and October.

Overall Tetrathlon in Area 5 is closing this year in a great place. Well done to everyone, parents, helpers and members- on all your efforts to make tetrathlon what it is and for all the effort that goes into the sport. 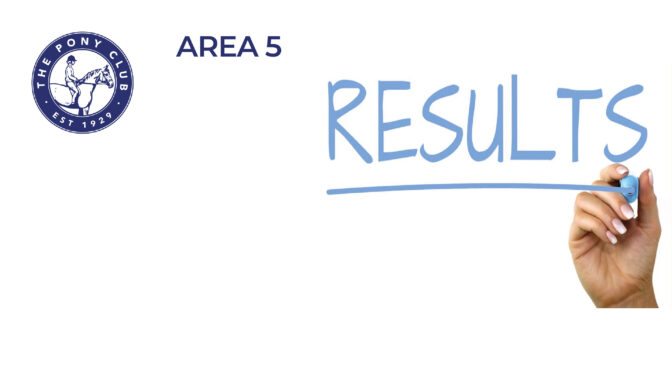 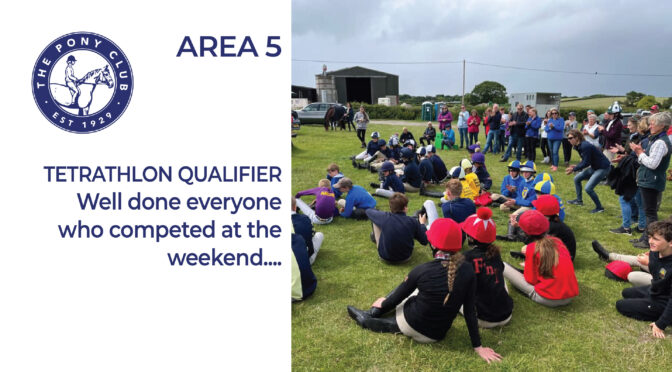 Well done everyone who competed at the weekend. It was lovely to see so many of you and especially to be joined by the Area 18 people.

I’ve attached the results but I’m sure most of you have already seen them on the www.ponyclubresults.co.uk site. The Triathlon Teams results had to be taken off that site as it can only show one team competition.

I’ve also attached the cross country fence summary as it might interest you to see where there were problems. If a rider was eliminated on course the results show 50 penalties for each fence after their elimination. If anyone wants to know how they did after that point just ask and I can look it up. 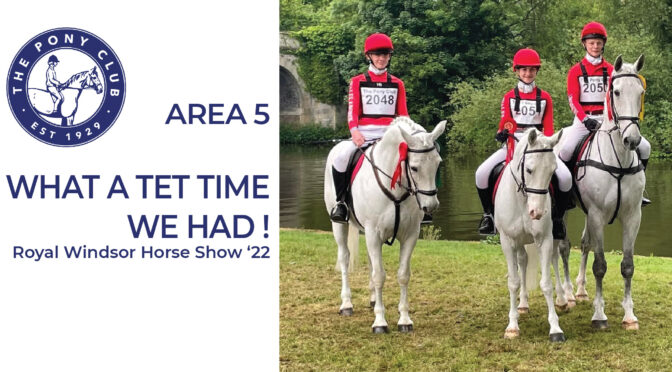 A Junior Tetrathlon Regional Team Competition took place at the Royal Windsor Horse Show at the weekend.  Teams of 3 (under 15) were selected from eight regions – Ireland, Scotland, Wales and the Borders plus 5 teams from different regions of England.  Twenty four of the best Juniors in the country took part and it was a weekend they will all remember for a very long time.

END_OF_DOCUMENT_TOKEN_TO_BE_REPLACED 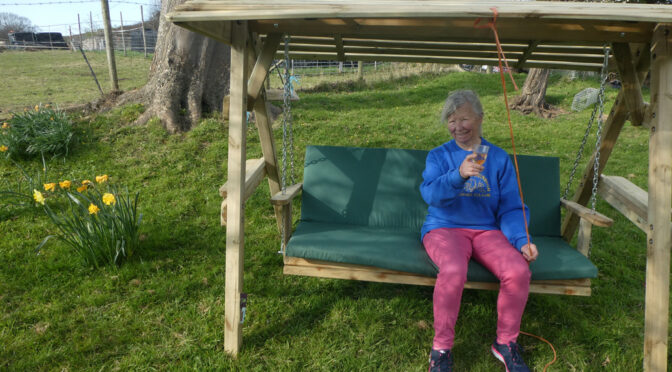 I just want to say a huge THANK YOU for my lovely garden swing from Branches and Centres in Area 5.
You could not have given me anything better. Every time I sit in it I will think of you all doing your bit for your members.
Many, many thanks.
Cheers
Meg